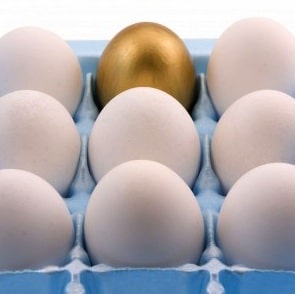 Researchers use new strategy to bypass ethical and legal restrictions on female bodies.
This week the journal Nature [subscription only] published results of a cloning experiment conducted by the New York Stem Cell Foundation that succeeded in growing stem cells to the blastocyst phase inside an egg that still contained the donor’s existing nucleus. Another breakthrough for cloning and stem-cell research. But what is most groundbreaking of all, at least for females and those who care about us, is the fact that researchers bypassed medical ethics, the donor guidelines of the National Academy of Sciences, and the laws in some US States, and countries including Canada, Britain, France, Australia, Belgium, Italy and China to do so. And men are applauding.
Human stem cell and cloning researchers need eggs. Human eggs. Which only female humans produce, and which can only be accessed by subjecting women to invasive surgical “harvesting” procedures which are risky, and even deadly. Researchers have been successful in growing any number of things in human eggs. But they cannot create the eggs. In order to obtain human eggs, female donors must undergo a four to six week medical screening and drug and  hormone injection treatment designed to hyperstimulate her ovaries into producing more than the one egg typically produced by normal ovulation.
(Control Ovarian Hyperstimulation (COH)
COH is done using different protocols. The most common one is a long GnRH-Agonist (Lupron) protocol where the secretion of gonadotropin hormones is suppressed in order to prevent premature ovulation. Once optimal suppression is achieved, the next step is the recruitment of multiple follicles by daily injections of gonadotropins. Ultrasound imaging and hormone assessments are used to monitor follicular development. When the lead follicles have reached the appropriate size, the final maturation of eggs is done by HCG administration. Egg retrieval is scheduled 34-36 hours after HCG injection.)
At the end of this process an ultrasound guided needle is used to puncture the vagina, abdominal wall or bladder to gain access to each ovary, where the eggs are aspirated into the needle while the woman is under intravenous sedation or local anaesthetic. Prophylactic antibiotics are also given.
Since the ovaries are movable and not fixed in place and the tissues are very soft, a special extremely sharp needle is used, which increases the chance of damage to surrounding tissues, including bowel perforation, ureter perforation, blood vessel perforation with resulting abdominal bleeding (The incidence of serious hemoperitoneum (free blood in the pelvis or abdomen) in the two large reports of transvaginal ultrasound guided egg aspirations is 0.6% (about 1 in 200) with half of these treated with laparoscopy and the remainder requiring a laparotomy.)
Some of the risks and side effects of this procedure:
“The drugs used to hyperstimulate the ovaries also have negative effects, most notably a condition called Ovarian Hyperstimulation Syndrome (OHSS). Serious cases of this syndrome involve the development of cysts and enlargement of the ovaries, along with massive fluid build-up in the body. As noted in an article in Human Reproduction Update, “the reported prevalence of the severe form of OHSS is small, ranging from .05 to 5% [of women undergoing gonadotropin regimens]. Nevertheless, as this is an iatrogenic [medically induced] complication of a non-vital treatment with a potentially fatal outcome, the syndrome remains a serious problem for specialists dealing with infertility.”[1]  Also, as noted by Dr. Suzanne Parisian, a former Chief Medical Officer at the FDA, “OHSS carries an increased risk of clotting disorders, kidney damage, and ovarian twisting. Ovarian stimulation in general has been associated with serious life threatening pulmonary conditions in FDA trials including thromboembolic events, pulmonary embolism, pulmonary infarction, cerebral vascular accident (stroke) and arterial occlusion with loss of a limb and death.”[2] One Institutional Review Board (IRB) for Advanced Cell Technology in Massachusetts cited the risks as including “high blood pressure; fluid accumulation in the limbs; formation of blood clots which potentially could be dislodged from the involved vein or artery causing damage to vital organs such as lungs, heart or brain; intestinal problems such as decreased appetite, constipation; nausea and vomiting, diarrhea, difficulty in swallowing; intestinal bleeding, intestinal ulcers and polyps; thyroid enlargement; breast tenderness; hot flashes; bone, muscle and joint pain; anxiety; depression; blurred vision; mood swings; nervousness; numbness; taste changes; memory problems; lightheadedness; blackouts; and headaches.” [3] ”

““There’s no health-outcome data collected by anybody other than some voluntary reporting, and there’s no postmarket testing on how these drugs are being used,” said Susan Berke Fogel, co-founder of the Pro-Choice Alliance for Responsible Research, a project of the Public Health Institute in Oakland, Calif.”

Due to the invasiveness and risk of human egg harvesting, laws have been passed in many forward-thinking countries and states to prevent a class of impoverished females being economically exploited by researchers who would subject them to medically invasive and sometimes deadly surgical procedures. The same reasoning behind laws which prevent humans from undergoing other invasive medical procedures for profit. Organ donation, for example is considered medically unethical and illegal when the donor is paid, because such payment is considered economically coercive and targets poor people for exploitation in a manner that is considered inhumane. But unlike organ donation, the only humans effected by egg harvesting are female humans. And Wednesday’s published research shows that not only were the worldwide prohibitions against high-risk medical donation bypassed but the precedent is being applauded by male scientists and researchers.
From the LaTimes :
“Another notable thing about the research, which was published in the journal Nature: The team paid the women who provided the eggs used in the study, a practice that has been forbidden by ethical guidelines from scientific organizations around the world.  Some ethicists have argued that paying women for their eggs might create an exploitative trade. But in this case, it may be the reason why the researchers were able to collect enough healthy eggs (they used 270 in all) to get their historic result.
Teams have “tried to recruit donors on altruistic grounds and failed,” said New York Stem Cell Foundation researcher and study co-leader Dieter Egli, during a news conference on Tuesday.  “That’s why we knew it was not the way to go in New York.”
Dr. Robert Lanza, a stem cell researcher with Advanced Cell Technology in Worcester, Mass., told The Times that in his experience, it can take a year to get one donor, and perhaps five to 10 eggs, lined up.
“One year we put out an ad.  The problem was, we got these patients, they’d say sure, and then they’d see the poster down the hall about getting paid [to donate eggs] for reproduction,” he said.  “It’s hard to get volunteers.  At best you’ll get a handful of eggs.”
To avoid exerting undue influence on the donors, the New York team paid them $8,000 for the time and burden of donation (which does pose risks), then allowed them to decide later if they wanted their eggs to be used for research or for reproduction. That way, the conversation about payment was already over before any talk about scientific research began.
In an article that accompanied the New York study in Nature, medical ethicist Jan Helge Solbakk of the University of Oslo praised the researchers for their approach.  “The authors’ approach represents the first step towards acknowledging women as genuine participants — co-producers even — in the generation of new knowledge,” he wrote.
[embolding mine-GM]
“Co-producers even- in the generation of new knowlege”. Riggght. When no women agree to “partnering” with researchers unless they are paid $8,000, that is not a “partnership”. It is economic exploitation and unethical medical experimentation targeting the most vulnerable humans: impoverished females.
If this precedent is not challenged, open-season on economically deprived females by unethical medical researchers will become every day, including females who are killed by researchers collecting eggs. Researchers claim that at least 100 human eggs are required for each single stem cell line. That means that for every potential person treated with stem cells, TEN women must undergo this egg harvesting procedure. According to a press release jointly issued by The Center For Genetics and Society, The Pro-Choice Alliance for Responsible Research, Our Bodies Ourselves, and The Alliance for Humane Biotechnology, the legal limits on the number of eggs were also ignored:
“The authors of the Nature report note that one of the women from whom they obtained eggs for their work produced 26 eggs. Some fertility doctors warn that no more than 10–15 eggs should be extracted from a woman’s ovaries in a single cycle, because “when the egg number exceeds 20, the risk of OHSS [ovarian hyperstimulation syndrome] becomes high.”[i]  The authors claimed to have followed the guidelines of the American Society for Reproductive Medicine (ASRM), but they did not. For example, they offered a sum of money significantly higher than the ASRM guidelines allow. Nor did they follow the recommendations of the International Society for Stem Cell Research (ISSCR) that “the treating physician or infertility clinician should not also be the investigator who is proposing to perform research on the donated materials.”
Not only that, but the joint press release states that the women were put at risk and subjected to dangerous invasive surgical procedures for research that was totally hypothetical and had no supportive data – it was just a crap shoot:
“The authors speculate that with enough eggs, they might be able to produce genome-specific stem cells. However, they offer no discussion of any exploratory research in animal models. For example, what have been the findings, if any, of animal research seeking to identify the oocyte nuclear factor that they hypothesize?
“We cannot now justify the solicitation of young women to provide eggs for this kind of speculative research,” says Diane Beeson of the Alliance for Humane Biotechnology.”
“Marcy Darnovsky, PhD, Associate Executive Director of the Center for Genetics and Society, says:
“This new form of research cloning, like the old one, still represents a highly speculative approach to stem cell research. We should not put the health of young women at risk, especially to get raw materials for such exploratory investigations.”
It’s the Wild Wild West in cloning research. And female bodies are the great frontier.
Women’s lives and health are just a necessary cost.
$8,000 each, to be precise.

23 thoughts on “The Price of a Woman: Females, Cloning and Stem-cell Research”