A group of Saudi women are organizing a mass “drive-in” for June 17, 2011. They will risk arrest, the loss of their jobs, and possibly further restriction on what little freedoms they have.
From The Seattle Times: “Saudi Arabia enforces the ascetic Wahhabi version of Sunni Islam. Women aren’t allowed to have a Saudi driver’s permit. They can’t travel or get an education without male approval, or mix with unrelated men in public places. They aren’t permitted to vote or run as candidates in municipal elections, the only ones the kingdom allows.
The last time a group of women publicly defied the driving ban was on Nov. 6, 1990, when U.S. troops had massed in Saudi Arabia to prepare for a war that would expel Iraq from Kuwait. The Saudi women were spurred by images of female U.S. soldiers driving in the desert and stories of Kuwaiti women driving their children to safety, and they were counting on the presence of international media to ensure their story would reach the world and lessen the repercussions, according to Noura Abdullah, 55.
Abdullah was one of 47 drivers and passengers who stayed out for about an hour before being arrested. They were banned from travel for a year, lost their jobs for 2 ½ years and were condemned by the powerful clergy as harlots.”
According to the United Nations 2010 Human Development Report’s Gender Equality Index, although Saudi Arabia scores high in development, they are one of the worst nations in the world when it comes to gender equality. “The country shows high human development, with a global HDI [Human Development Index] ranking of 55, an HDI of 0.75 and income per capita of nearly $25,000. However, despite good female educational attainment, women are nearly absent from parliament, and female labour force participation rates are only one-forth those for men, giving the country a GII [Gender Inequality Index] value of 0.76, and a ranking of 128 out of 138 countries.”
The Saudi government has hinted many times over the years that the restriction on female driving would be lifted, but it has never followed through. The Guardian reports that a 2004 study showed 47% of Saudi women own a car! But they are not permitted to drive them. According to http://www.saudiwomendriving.blogspot.com/ , a site devoted entirely to news surrounding Saudi women driving, the fact that average families cannot afford to pay for taxis or drivers means the ban has an even more severe effect on women of lower income and their families.

A Facebook Page has been set up by some of the women who are planning the protest. As of today nearly 2000 have pledged to participate. They declare: “On June 17th, 2011.. We women in Saudi Arabia, from all nationalities, will start driving our cars by ourselves
We are not here to break the law or demonstrate or challenge the authorities, we are here to claim one of our simplest rights
We have driver’s license and we will abide by the traffic laws..
Enough with the talk… we are here to walk the talk and just do it.. it’s about time!”
(The participating women are being advised to have international driver’s licenses, since Saudi licenses are not issued to women. That way additional charges cannot be brought against them).
Also a twitter site has been set up to gather support, and to post updates on the day of the event. http://twitter.com/#!/Women2Drive 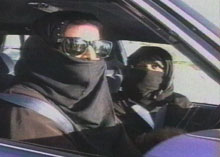